The eastern half of Martha’s Vineyard is called Down-Island and the western half is called Up-Island. Why you ask? To confuse you, that’s why. Not really, at least not on purpose. There is a very logical reason and here it is according to the MV website.

” Up-Island is the western area, which comprises the three rural towns of Aquinnah, Chilmark and West Tisbury. Down-Island is the eastern portion, home to the larger historic villages of Edgartown, Oak Bluffs and Vineyard Haven (also known as Tisbury). The two terms come from the rich seagoing tradition of Martha’s Vineyard, which once sent its whaling ships circuling the globe heading “up” in nautical terms takes you “west” because it’s further from zero degrees of longitude in Greenwich, England, home of the Prime Meridian.”

Well then, according to the Guide to Martha’s Vineyard we have this explanation. “When a ship sails in an easterly direction, it is decreasing or running “down” the degrees of longitude toward zero at Greenwich, England. A westbound vessel, on the other hand, is running “up” its longitude. Thus the Down-Island town are those on the eastern and northeastern end of the Island. The Up-Island communities are at the western end. A ship moving through Vineyard Sound sails “up” to New York and “down” east to Maine.” Ah ha.

OK, I’m still confused but I do know how to get from Down-Island to Up-Island and not get lost… it’s an Island, how lost could one get anyway.

Got all that… me neither 🙂

But that’s not the only confusion about the Vineyard … she had an identity crisis at one time involving Massachusetts and New York.

Martha! Martin! New York! Massachusetts! How many aliases and states have claimed this 100 sq mile island? The Wampanoags named it Noepe and that stuck until Bartholomew Gosnold came along in 1602.

No one seems to know who the Martin was whose name was once attached to the Vineyard… so let’s move ahead to Martha whose identity is still shrouded in myth. Was she one of Gosnold’s daughters, or his mother, or the name of an English royal. Whoever she was her name stuck and in my opinion has a nicer ring to it then Martin’s Vineyard.

Mid-June every summer of my childhood my mother and I would start our trip to the Vineyard.for the entire summer  There was no I-95, not that we had a car anyway… no, our train travels would begin in Newark, New Jersey and end in Woods Hole.  Yes, WOODS HOLE, trains used to go right to the ferry.

We would take a train from Pennsylvania Station in Newark, NJ to Pennsylvania station in New York city where we would have to run from one end of the station to the other to board the New York/New Haven & Hartford’s train on the Old Colony line called the Day Cape Codder, which would take us all the way from New York City to Woods Hole, MA. That’s right, all the way to Woods Hole.

Pennsylvania Station was built in 1910, covered nearly 8 acres, extended 2 city blocks and was one of the largest public spaces in the world.  Its 3 year demolition began in October 1963.  It was replace with another Penn Station which Madison Sq Garden sits atop… it’s functional but not as beautiful as the original 🙂 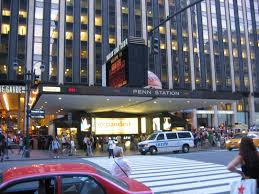 The train stopped at what is now the staging area for cars waiting to get onto the ferries. The tracks ran under the overpass in the left corner of this photograph.  It was literally only steps from train to boat.  A comfortable and luxurious way to travel in the days when lots of people didn’t have cars and the road system left a lot to be desired anyway.

The trains had dining cars with each table dressed in fancy tablecloths and crisply ironed napkins.  The waiters and conductors were always the same and seemed to remember me from year to year… made me feel special and grown up. Train service to Woods Hole ended in the 1960′s. The ferry, the Nobska/Nantucket would take us to MV.

We’d land in Oak Bluffs and our relatives would be there to greet us, and three glorious months on the Vineyard would begin.

We traveled light, I would have my favorite doll, Beverly, and my teddy bear with me and my mother would have a small suitcase with a few belongings in it, the rest of the things… like ALL my toys we sent to and from the Vineyard by Railway Express.

It took days for the rest of our things to arrive and I would watch every day for the Railway Express truck to arrive.

and then summer on the Vineyard would officially be under way 🙂

I’ve seen it 3 times and would see it again and again.

This poster is on the front of the theatre and if you look closely can see it’s made up of all tiny photos.

Have you seen Phantom ?

My daughter Deb, our friend Dawn and I went to NYC last Saturday to see…tah dah… the funniest, most hysterical musical comedy I think I’ve ever seen… and despite the title… it was not rotten 🙂  Come along and join us on our matinee day in the city.

After getting coffee we headed to Times Square…

You can always count on seeing a lot of characters roaming Times Sq, for example take a look at the characters in the last picture, crazy looking bunch 🙂

You might even see a proposal taking place, although I wonder if the one we saw was a real one or staged since there was a camera crew there !  At any rate it picture worthy.

Next up was lunch.. Junior’s Restaurant & Bar was our choice and it was a good one… we all chose sandwiches which were huge and delicious, the side dishes of pickles and also beets were great…but the icing on the cake, or in this case the blueberries on the cheesecake was oh so good… one piece shared 3 ways was perfect.

and now the main event…  I present …’Something Rotten’..

Inside before the magic, and the laughter began…

And of course way too soon the laughter, the music, and the magic ended and it was out into the cold evening with memories of a fantastic, not rotten, matinee day in the city 🙂

Recently on my daughter Deb’s birthday we went for a walk over the Hudson River on the beautiful Walkway Over The Hudson,

(the above photo is from Google, all others are mine)

The walkway is in Poughkeepsie, New York… it was a former railroad bridge built in 1889, the bridge deck stands 212 feet above the river’s surface and is 1.28 miles long, making it the longest, elevated pedestrian bridge in the world.  The day we were there was sunny, cloudy, breezy, windy and as you can see still lots of beautiful foliage.   Here we go…

down river towards NYC which is approximately 85 miles away…

and another stunning view of the Mid-Hudson Bridge..b

After we had lunch and rested for a bit we started back across the bridge..

I want to give honorable mention to 14 year old granddog Chappy who never once slowed down and enjoyed every moment of the bridge walk.

This was so much fun and if it were closer than almost 2 hours from where I live I’d walk it more often.

Here are links to Walkway Over the Hudson:

My parents and I always left the day after Labor Day, we sailed from Oak Bluffs, and usually on the Nobska.

Back in the 1950’s my parents and I traveled to and from Martha’s Vineyard by train… the New York, New Haven and Hartford railroad’s Cape Codder went from Pennsylvania Station in NYC right to Woods Hole… or vice versa at the end of the summer.

The train stopped at what is now the staging area for cars waiting to get onto the ferries. The tracks ran under the overpass in the left corner of the photograph below.  It was literally only steps from boat to train.  Train service ended in the 1960’s.

I loved riding on the train, still do. The trip to NYC took about 5 hours and then we arrived in Pennsylvania Station in NYC.

We traveled light on our way home, I would have my favorite doll, Beverly, and my teddy bear with me and my parents would have a small suitcase with a few belongings in it, the rest of the things… like ALL my toys we sent to and from the Vineyard by Railway Express.

It took days for the rest of our things to arrive home and I would watch every day for the Railway Express truck to arrive.

It was bittersweet seeing that truck as I was happy to have my toys and things back but it also meant the official end of summer for me.