It all began with this little snippet in the Vineyard Gazette 29 years ago in September of 1990. My daughter Deb liked Harry Connick Jr and I’m a huge fan of Carly Simon, I have been even before I knew of her Vineyard connection. This seemed like a perfect weekend getaway for us but how could I manage to get tickets when I live in NJ and they were only on sale on the Vineyard !

I did it.  I was determined and when it involves the Vineyard my determination is un-stoppable.  So off we went.  There were a few glitches along the way concerning MV accommodations and ferry reservations so we decided to stay in Falmouth on the mainland and just go to the Vineyard for the day of the concert.

It was a spectacular September Sunday afternoon on the Vineyard, the Campground was filled with happy concertgoers bustling around..

Before the concert began we were talking with a woman sitting next to us who was going on and on about how excited she was to be seeing Carly Simon.  She said she had chatted about it with her seat mate on the small plane she had flown over to MV on that afternoon.  She told him she had no idea who Harry Connick Jr was but that she was mainly there to see Carly.

When Harry stepped onto the stage she gasped and said ‘oh my god, that’s the young man I was talking to on the plane.’

At 3pm the concert began.  Harry’s band was fantastic and Harry’s voice velvety smooth.  After about an hour or so of great music the lights were turned off.  The only illumination was the sun shining through the stained glass windows around the perimeter of the Tabernacle.  And then… out stepped Carly.

I was beside myself, in actuality though the person beside me was Carly’s mother.  I have seen Carly in concert several times since then but seeing her on the Vineyard and at the Tabernacle was something special for me.

Harry and Carly sang a few songs together, their voices meshed beautifully.  Carly did a few songs alone and then way too soon it was over.  What a fantastic day, one we’ll never forget.

The reviews of the concert were glowing, much like the talents of Carly Simon and Harry Connick Jr as they stood side by side on the stage of the Tabernacle.

After the concert we had ‘drinks’ with the band at the Oyster Bar in Oak Bluffs.. us and about 100 other people.  Afterwards we headed to Edgartown for dinner.

Too quickly our lovely day on the Vineyard was coming to an end.  We drove back to Oak Bluffs for one last look at the now darkened Tabernacle. 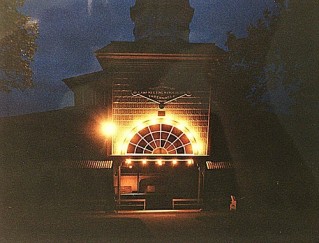 We had booked a late ferry and it’s one of the few times I’ve sailed at night.  The sky was star filled, a cool breeze was blowing and a young man on board was strumming his guitar and singing softly.  Perfect day.

I’ve seen Carly 6 or 7 times but this was the first time and there couldn’t have been a more perfect place.