What’s it like to finally meet someone you’ve admired for years, someone you have  come close to meeting through mutual friends but didn’t for one reason or another, and so you resigned yourself to the fact that it would never happen!  Carly Simon has always been an inspiration to me through her song lyrics and through her written words, and to meet her, although for only a few minutes…. well, it was down right awesome, nerve wracking and surreal and all I hoped it would be. 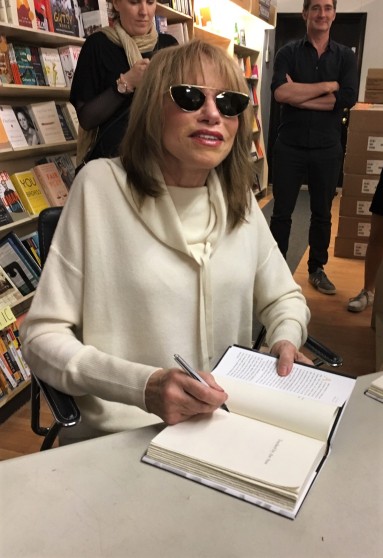 After 40 years of being a fan and admirer of Carly Simon – 5 concerts (MV with Harry Connick Jr, NJ art center, Lincoln Center, the Apollo and Joe’s Pub in NYC)… 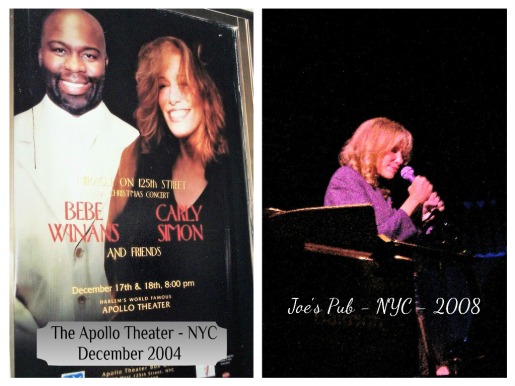 After a lifetime of both of us having a connection to Martha’s Vineyard and never ever meeting each other it finally happened on Oct 24th here in NJ at Carly’s book signing for her new book ‘Touched By The Sun’ about her long time friend ship with Jacqueline Kennedy Onassis.

How did this come to be after all these years?  Carly has done signings of CD’s and books over the years in NYC but I’ve never been able to make them, but when it was announced she was going to be on this side of the Hudson River in New Jersey and not far from where I live, and an early evening appearance… we knew it had to be now or possibly never.

My daughter got off from work early and we left around 3 for the 6 o’clock signing.  We got to Bookends in Ridgewood, NJ around 4.  There were already maybe 7 people in line outside, we went into the book store to purchase our reserved copies of the book which were our tickets into the event, got a refreshment and then got in line which had swelled to about 12 people by then.  I was so relieved to be near the front, and my daughter could relax knowing she had delivered me bright and early to the event.  I tend to get anxious sometimes and this was absolutely one of those times. The final estimate was between 250-300 people.  Around 5 they led us into the bookstore and downstairs into a large room where they had a sort of roped off maze of lanes which led up to the front of the room where there was a desk. My description is horrible but the concept was great as it kept everyone orderly and in order of how you first got in line.  As in most cases when you’re in a line for awhile for something you begin chatting with those around you, some were sitting on the floor already reading Carly’s book, my daughter was knitting socks, everyone was friendly, happy and anxious for 6pm to roll around.

A little after 6 we were all led back upstairs where Carly was seated behind a desk waiting for her eager fans. 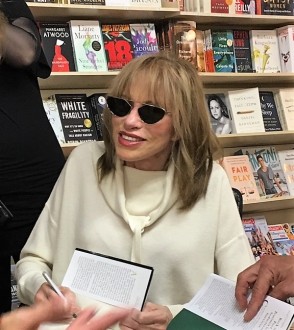 Carly looked gorgeous, she was charming, gracious and warm, she didn’t rush anyone and spoke to you like the two of you were the only ones in the room.  I was afraid I would turn out to be one of those ‘gushy’ fans that says the same things she’s heard a zillion times so I practiced in my head what I wanted to say in the short amount of time I had.  I did not gush, I did not blather, I did not forget my name, or hers,  I was my version of cool.

I wonder if we were both thinking the same thing… 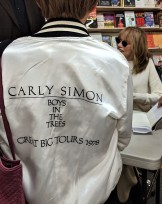 If you’re wondering why the pictures show the back of the jacket I have on, it’s from Carly’s tour in 1978 when her ‘Boys In The Trees’ album came out. I came into possession of the jacket through two mutual friends of mine and Carly’s and thought she might get a kick out of seeing it.  She did.

Thank you Carly for all the years of your incredible music,your heart felt lyrics (there’s a Carly song for every emotion),  and for books, you are truly an inspiration.