Newark, New Jersey is where I was born and grew up.  As you can tell by the clock it’s a timeless city 🙂 Last week my daughter Deb, our cousin Kris, our friend Dawn and I went off on our adventure 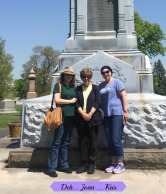 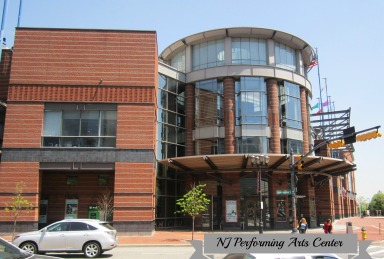 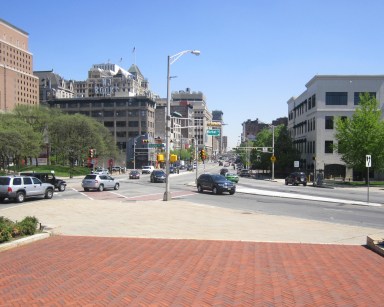 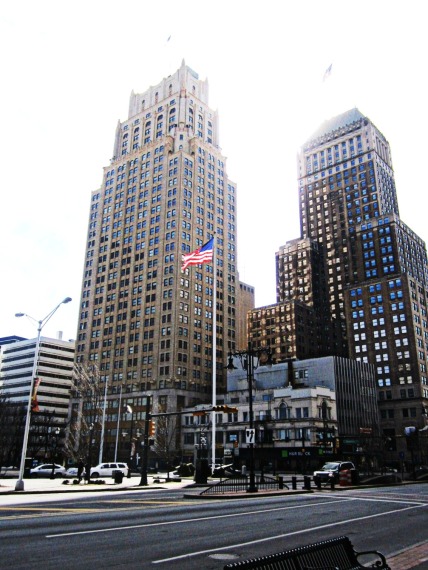 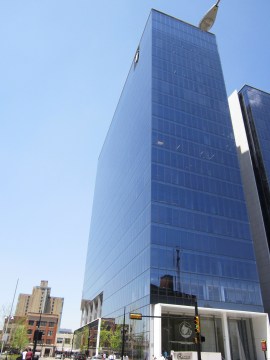 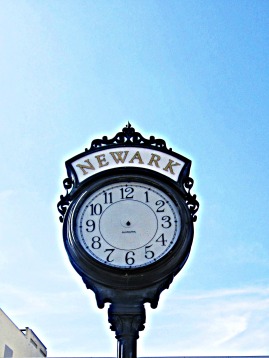 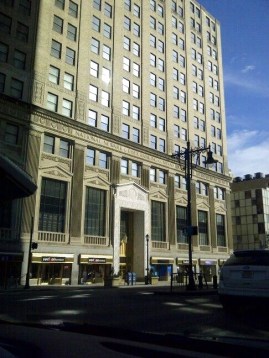 Our family, the Freeman’s go back to the original founding fathers of Newark.  My 8th times great grandfather (not sure of the number), Stephen Freeman, along with Robert Treat and a host of other men from Milford and Branford, Ct founded the city of Newark in 1666.  It has just celebrated its 350 birthday in 2016.  I am the last of our particular Freeman line to be born in Newark as was my father, my grandfather etc.

The monument to the founding fathers fell into disrepair and actually disappeared for many years.

(The 9-foot-tall monument, which weighs 13,000 pounds, was lying on its back underneath a tattered blue tarp in a city lot at the city’s Division of Traffic and Signals. Without further inspection, you’d think it was discarded junk.The marble base was detached. The wooden pallet that held the monument was in standing water between a trash bin and a gaggle of inoperable traffic lights.Not exactly what Newark’s stakeholders had in mind when they gave it to the city in 1916 to celebrate its 250th anniversary.) You can read more of that article by CLICKING HERE…

Thankfully it was restored and put in its new location in 2016 for Newark’s 350th anniversary. 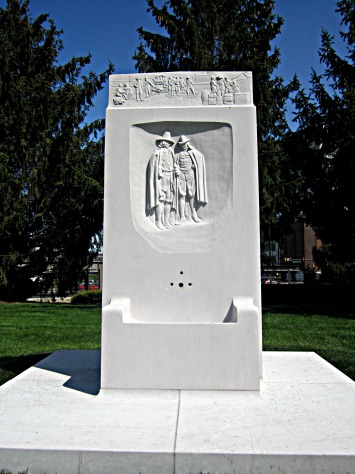 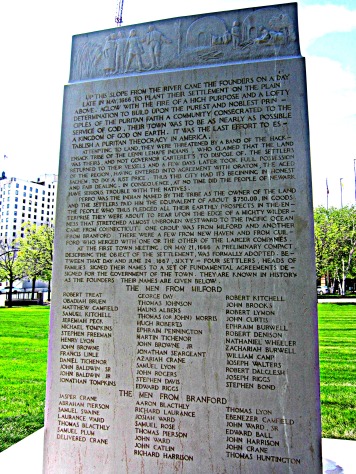 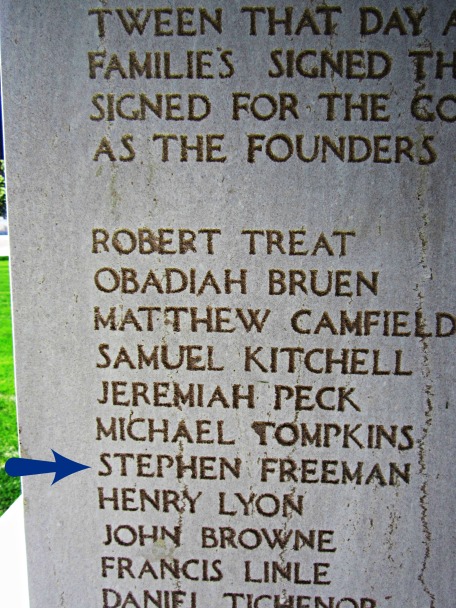 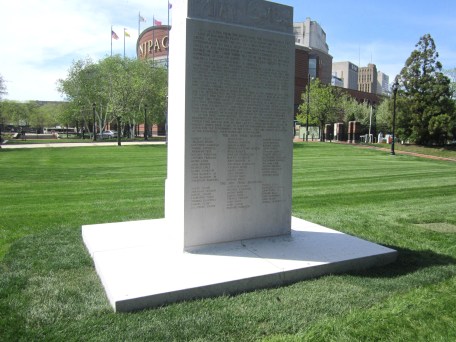 There is also another founding fathers statue which is located in Fairmont Cemetery.  Just so happens many of our ancestors are buried there but that will be in another blog post.

My daughter Deb, myself, our cousin Kristan. 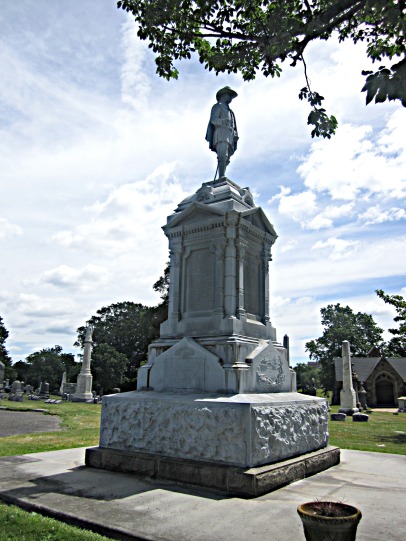 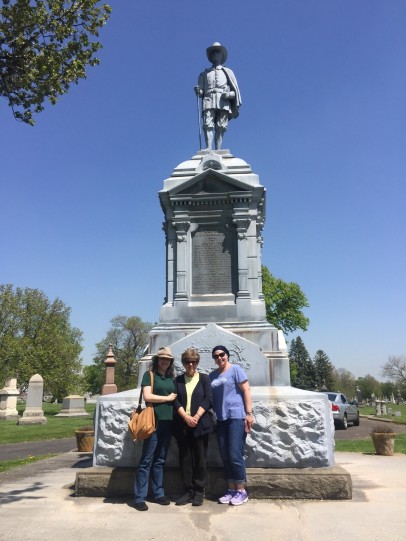 We headed to the Court House to see the ‘Seated LIncoln’ statue of Abraham Lincoln sculpted by Gutzon Borglum who was the creator of the Mount Rushmore sculpture of Presidents Washington, Jefferson, Lincoln and Theodore Roosevelt.  CLICK HERE to read about the Seated Lincoln statue in Newark.

The main reason I wanted to visit this sculpture was to try and recreate a picture my mother and grandmother had taken in the 1920’s. 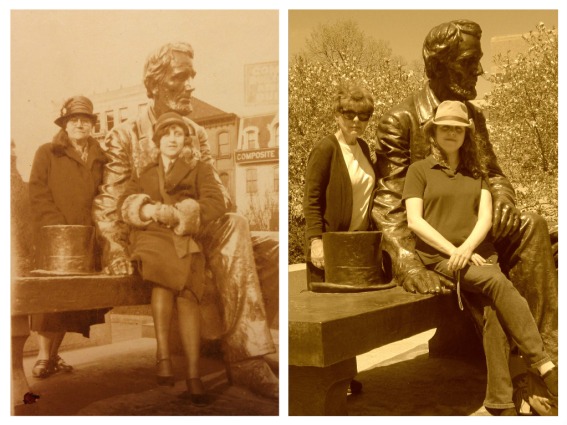 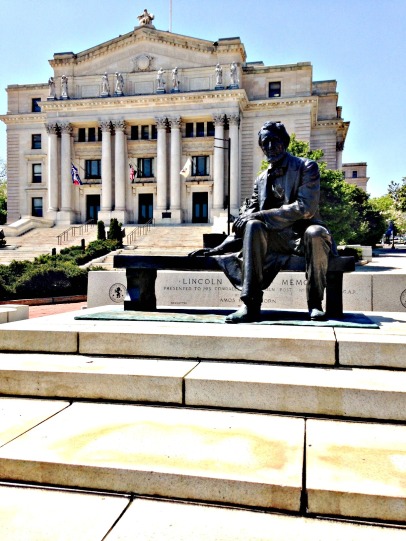 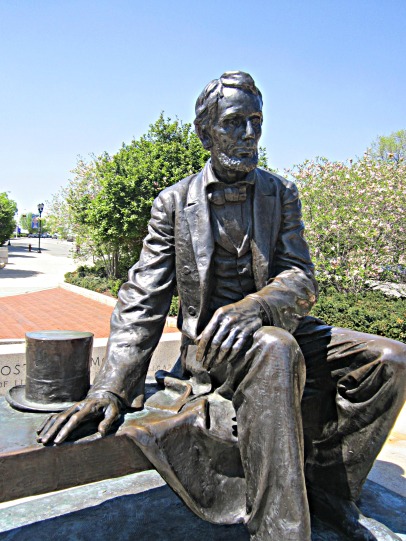 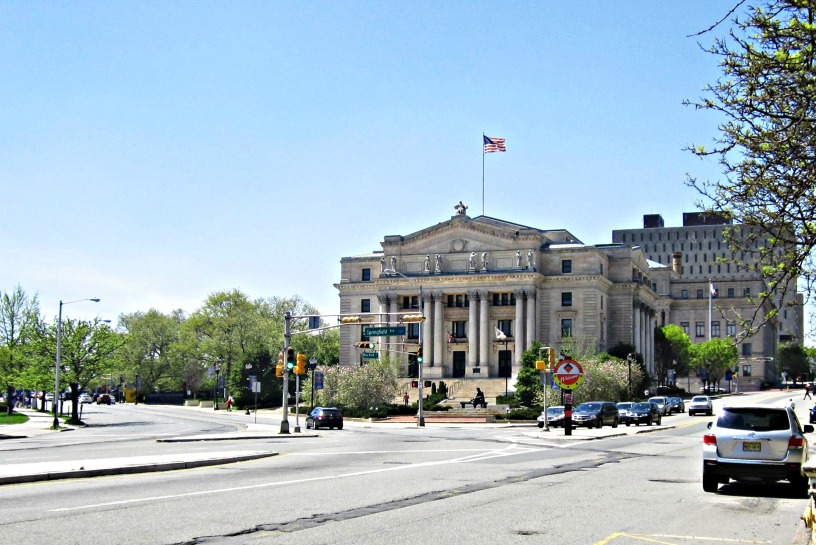 Surprising to many who don’t know much about the city of Newark, it has some beautiful parks in it.  Washington Park, Lincoln Park and the newly revitalized Military Park.  CLICK HERE PLEASE… 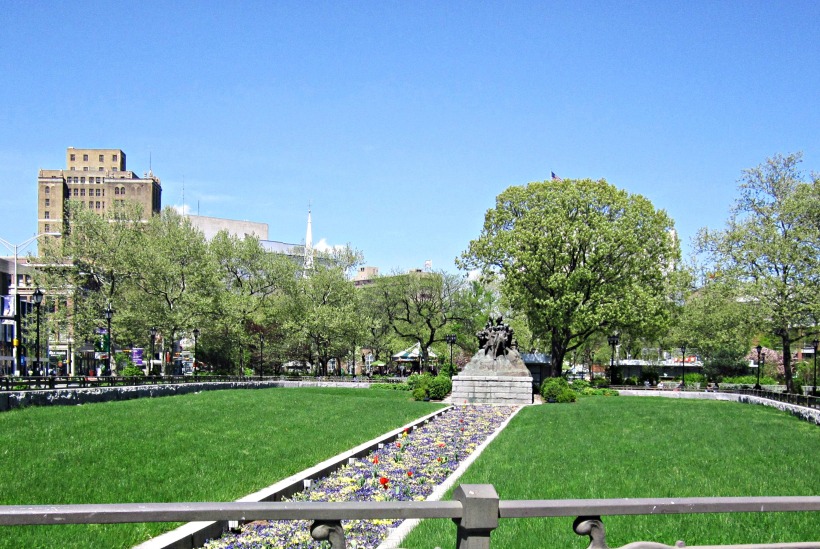 The newly revitalized park reopened in June 2014.  There are outdoor tables, walking paths, statue of John F Kennedy, ping-pong tables, nice umbrellas which my group utilized to get out of the 87 degree heat the day we were there, and the Liberty Pole. 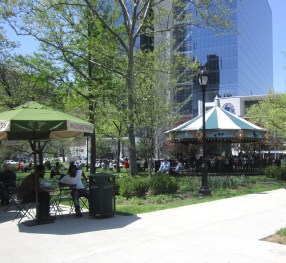 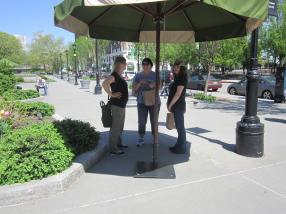 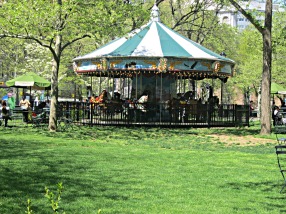 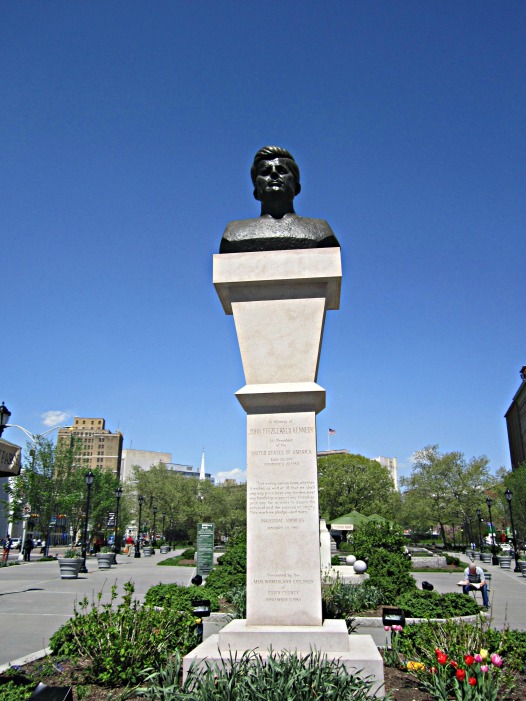 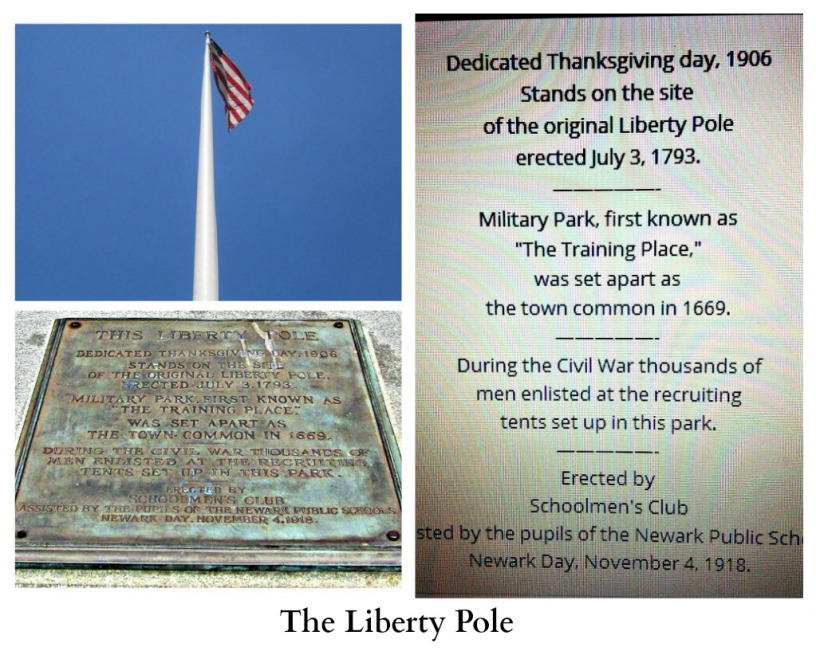 *From Wikipedia —  Military Park is a 6-acre city park in downtown Newark, New Jersey.  From 1667, when the city was planned, until 1869 it was a training ground for soldiers.  In 1869 it became the town commons.*

The most impressive thing in Military Park is the ‘Wars Of America’ sculpture by Gutzon Borglum (who also sculpted the above mentioned statue of Lincoln).

*From NJ.com -The bronze masterpiece consists of forty-two human beings and two horses and commemorates America’s participation in the Revolution, War of 1812; Indian Wars; Mexican War, the Civil War, Spanish American War and World War I.

It is in Military Park, which dates back to 1667–when the park was a training ground for soldiers and, later, a drill field for the Colonial and Continental armies–where the colossal Wars of America statue stands in striking relief. It is the centerpiece of the park. 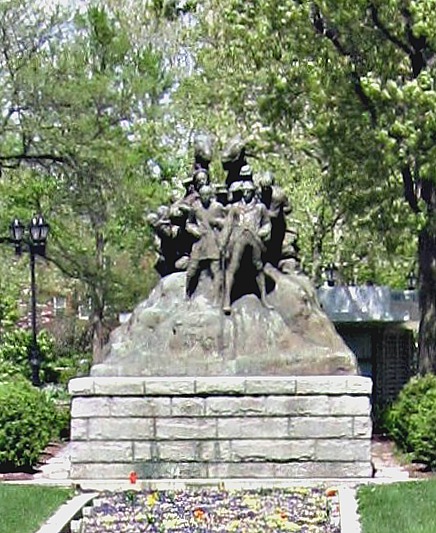 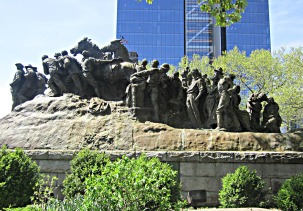 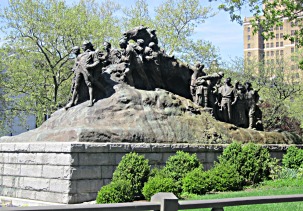 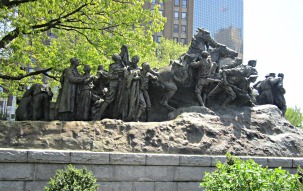 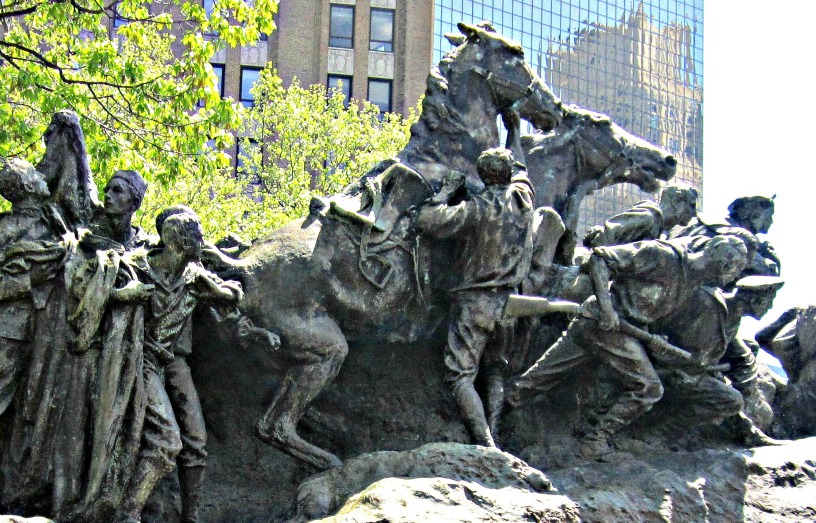 Thus ends my latest trip back to Newark.  Since we’ve been delving into our family ancestry and our connection to the city I come from we’ve been back to Newark more times in the past two years than I had been in the last maybe 30 years.  I have a feeling we’re not done yet 🙂