The Elms was the summer residence of Mr. and Mrs. Edward Julius Berwind of Philadelphia and New York. Mr. Berwind made his fortune in the coal industry. In 1898, the Berwinds engaged Philadelphia architect Horace Trumbauer to design a house modeled after the mid-18th century French chateau d’Asnieres (c.1750) outside Paris.

I think the Elms might be my favorite…I mean they’re all beautiful in their over the top ornate way but somehow the Elms seems to be more cozy if that’s possible. Or perhaps it’s the fact that this piece of history came within weeks of being torn down !

The Elms was the summer residence of Edward and Sarah Berwind of Philadelphia and New York. In 1922 Mrs. Berwind died, and Edward asked his youngest sister Julia Berwind to move in and become the hostess of The Elms. In 1936 when he died he willed the house to Julia who lived there until she died in 1961.

This according to Wikipedia: Childless, Julia Berwind willed the estate to a nephew, who did not want it and fruitlessly tried to pass The Elms to someone else in the family. Finally the family auctioned off the contents of the estate and sold the property to a developer who wanted to tear it down. In 1962, just weeks before its date with the wrecking ball, The Elms was purchased by the Preservation Society of Newport County for $116,000.  Since then, the house has been open to the public for tours. The house was listed on the National Register of Historic Places in 1971, and was designated a National Historic Landmark in 1996.

Let’s take a look around the house and gardens before heading off to my favorite part of the tour !!!

The conservatory… I could spend all my time in here…

The back lawn and gardens…

According to Wikipedia: Edward asked his youngest sister Julia A. Berwind to move in and become the hostess of The Elms after his wife died. In 1936, when he died, he willed the house to Julia, who  was well known in Newport. She would invite children from the nearby Fifth Ward (a working-class immigrant neighborhood) to the estate for milk and cookies. She had a love for cars and would drive around Newport every day in one of her luxury cars. This was somewhat shocking to the rest of Newport society where it was considered “unladylike” for women to drive themselves.

Now let’s get around to my favorite part …  the Servant Life Tour.  It’s 82 steps up to the 3td  floor. A balustrade around the roof of the mansion hides the entire dormitory-style third floor where single female and male servants lived in 16 rooms with 3 bathrooms. Married staff lived offsite. The back staircase kept the staff very much behind the scenes as they went about their duties,

There was also access to the roof and a beautiful view of Newport.. 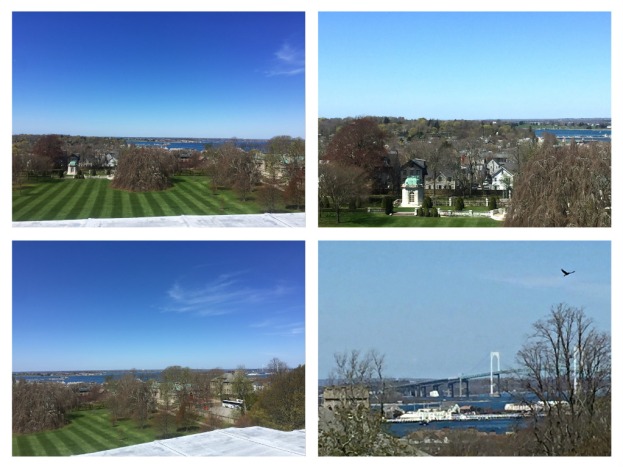 From there we headed back down the 82 steps to the basement to view the coal-fired furnaces and the tunnel from which the coal is brought into the basement from a nearby street, there’s a little coal in the corner to give you an idea of how massive this coal storage area was. Seen here is also the laundry room and kitchen.

That concludes the tour of the three mansions we visited.  But that’s not all so stay tuned for more.   In the meantime let your imagination take you away to a midnight stroll in the garden… happy dreaming.

(photographs by my daughter Deb and myself)